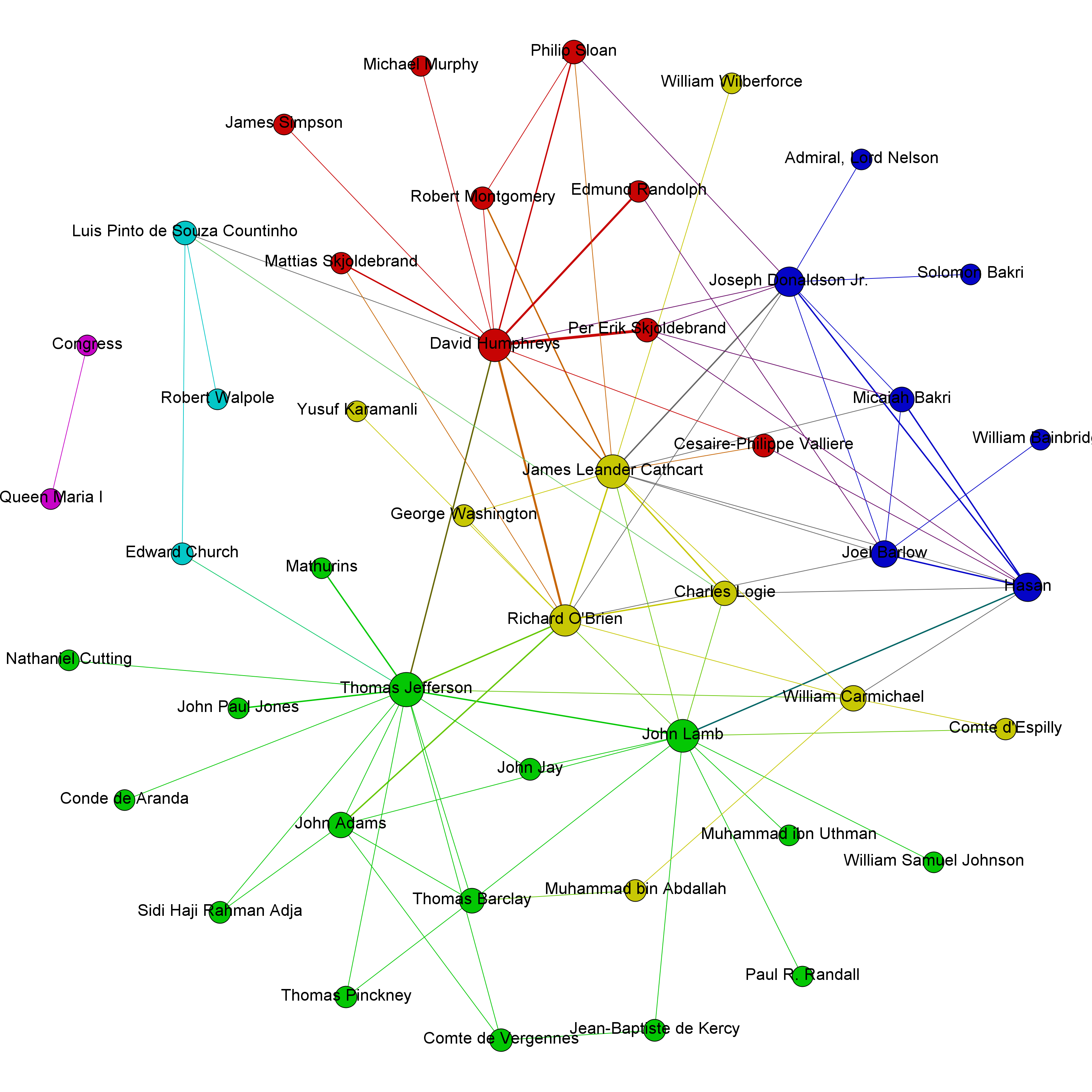 Americans had to negotiate with the Barbary states to secure the release of hostages, taken by Barbary corsairs, and to decide how much tribute would guarantee the safety of American shipping. The United States quickly felt the bite of diplomatic and military impotence. American diplomats, who had little power of their own, had to rely on the good graces of many others with better connections to the Algerine court. Sometimes, those others helped the American cause; at other times, they weren’t all that helpful; and on a few occasions, they purposely derailed American negotiations.

Richard B. Parker writes about the United States’ relationship with Algiers in Uncle Sam in Barbary: A Diplomatic History

, which details the complicated and sometimes absurd relationships of American diplomats, European diplomats and dignitaries, and the court of the Algerine dey. The story is quite complex, which makes it difficult to understand in a narrative, and Parker’s organization doesn’t help matters. (A quick shout-out to Jean Bauer, whose Early American Foreign Services Database was extremely helpful in elucidating the roles of some diplomats whom Parker does not adequately identity.)

Parameters and Characteristics of the Graph

To represent the American-Barbary diplomatic network, I created the graph in Gephi. I hate Gephi. I like Gephi. (You know what I mean.) This graph represents interactions from approximately 1785 to 1800. The last interaction I recorded was between the dey of Algiers and William Bainbridge in September 1800; this interaction was the first one in which the navy was directly involved (though it was a diplomatic interaction, not a military one). I decided to end my graph there because I’m most interested in how the navy changed things for U.S. relations with the Barbary states and with the European nations who had hitherto helped those relations.

The nodes are people who had a connection to Barbary diplomacy. The edges are letters and meetings that Parker writes about. I checked up on as many as I could using American State Papers, and I will continue to document the interactions more explicitly than Parker does in his bibliography (where he only records the collection, not the exact document, his source comes from).

Each node is color-coded by nationality; the next step is also to record where these people were actually living while they were engaged in Barbary negotiations.

The graph isn’t perfect (obviously). There’s a lot more to be done here. This graph is based solely on Parker’s book, which I’m not wholly convinced is accurate. In addition, Parker addresses only diplomatic relations with Algiers, not the other three Barbary states (Tripoli, Tunis, and Morocco). Furthermore, I haven’t attached dates to each edge, simply because Parker doesn’t provide dates for all of the interactions. A more dynamic timeline of the network changes would be most instructive. So there’s a lot more data that needs to be added to this graph. But I think it’s a good start toward understanding the global nature of American relations with the Barbary states, which culminated in the Barbary Wars of 1801-1805 and 1815.

Becoming an officer of the line in the navy is a bit like getting on the tenure track in academia. Not all officers are created equal–officers such as pursers, sailing masters, and chaplains were classified as officers and received the preferential treatment given to officers. But they could never be captains–they were not in line for those sorts of promotions.

The Naval Historical Center has made lists available of the officers of the navy and Marine Corps from 1775 to 1900. This list is very useful, but it’s not in a format that makes it easy to see the data in the aggregate. It includes both warrant officers (non-tenure-track) and line officers (tenure-track).

I wanted to look at the promotion trends of line officers from the early republic. There was no way to isolate those records in the form the NHC provides. So I built a Google spreadsheet that tracks each line officer’s initial date of entry and his subsequent promotions.

Following my desire to track how social connections changed as the navy developed, I’ve divided the officers into 4 groups, or generations. I had initially planned to do 3 generations, but after doing all the data input, I realized that 4 was a more logical divide.

First generation officers entered the service before 1801, as a rank higher than midshipman.

Second generation officers entered the service before the Peace Establishment Act (or by the end of 1801), but as midshipman. Thus, they essentially became adults in the service, and they learned their craft from the first generation.

Third generation officers entered the service as midshipmen after the Peace Establishment Act but before the end of the War of 1812. Those officers in this generation who became captain rose to that rank in the 1830s and ’40s.

Fourth generation officers entered the service after the War of 1812 had ended. These officers saw almost no wartime service, and many of the ones who achieved captain found themselves having to decide whether to serve in the Union or the Confederacy during the Civil War.

I marked a few things that were interesting that weren’t specifically promotion-related. Though I didn’t record dates of exit from the service, if the officer was discharged under the Peace Establishment Act, I marked it in column G as “PEA.” I also marked records where the official record indicates that the officer was killed in a duel (an idle curiosity about whether duels were really as prevalent as most historians have claimed).

Promotions in the navy are a bit tricky because the system of ranks changed considerably from 1798 to 1849 (the end point I selected for my data). But there were four standard ranks that prevailed throughout that time period, so for consistency, I tracked only those four ranks: midshipman, lieutenant, master commandant (then commander, an equivalent rank), and captain. It took until the Civil War for ranks above captain (such as commodore and admiral) to be created, so I didn’t record those.

All told, there are 3441 line officers in the NHC database. I’m not interested in all 3441 of them, most of whom never made it past midshipman. Since my project involves social networks of influence, I’m mostly interested in those officers who stayed around long enough to have influence, generally those who made it at least to lieutenant. However, I put all the line officers into my spreadsheet in case someone else wants the data.

There are several specific limitations on my spreadsheet that anyone who wants to use it (all 2 of you in the world) should be aware of.

Merely recording all this data given me a better understanding of how the promotion system worked in the early navy. But I’d like to do some visualizations showing the relative speed of promotion, how batch promotions work, and a few smaller things. So far I haven’t found a visualization program that will do it. (Suggestions are welcome!)

I’m sure there are plenty of other uses for this data, as well. For myself, it will help me to see where promotions don’t follow the general pattern–these aberrant promotions may very well be indicative of an intervention by a social connection. But I hope other people will be able to use it as well.